I’ve decided to revive an old tradition here on the blog and bring you weekly updates on what I’ve been listening to, what I should be listening to, and what I hear at parties.

This is all over the blogs these days. The kids just can’t get enough of it, and I can see why. The album is filled with distorted riffs coming from squeaky guitars and sometimes there are even squeakier violins. Throw in some distant vocals and you’ve got lo-fi mastery that owes more to the Velvet Underground circa The Velvet Underground than Pavement.

Everyone should know these guys. They just put out a new album entitled Með suð í eyrum við spilum endalaust. Say that ten times fast. No, try it in English: With a Buzz in Our Ears We Play Endlessly. It’s different than any other Sigur Ros album you’ve heard, but when was the last time Sigur Ros put out an album that wasn’t. I’m assuming by now that everyone has heard the single Gobbledigook, so here’s something else. 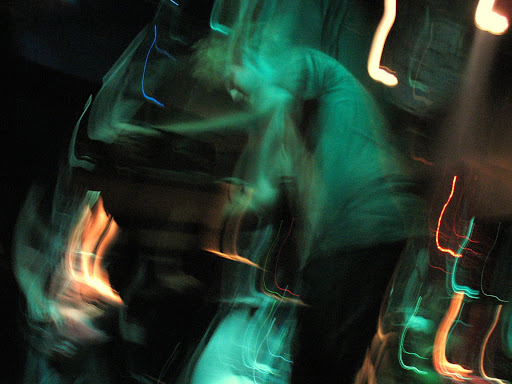 The incredibly blurry picture above is of Dan Friel. He is a member of Brooklyn-based noise rock band Parts & Labor, but I’m going to write about his new solo album. Friel plays keyboard and guitar and sings but does all them through every sort of comb filter and vocoder imaginable. Sounds kind of like Dan Deacon, but less dancey and more… well… noisy.

And finally, a little anecdote. Yesterday, returning from class, I stopped off at the Whole Foods in the Gold Coast neighborhood of Chicago. I only needed a few things: some soymilk, yoghurt, peanut butter, &c.. I was in the dairy section looking for yoghurt, but there was a man between myself and it. However, I was also between him and the milk that he needed. We met each other’s eyes, did that thing where one person steps out of the way, but the other moves too, and kind of shuffled around each other. It was awkward, but I got my yoghurt and Andrew Bird got his milk.

I don’t actually have the song I was going to share, but it’s Don’t Wait For the Needle To Drop by Dosh. It features Bird plucking some nasty beats. Hypemachine it or something.

One Response to “Wardicus Wednesday – #1”