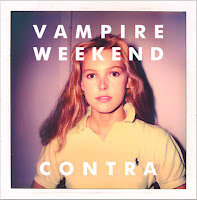 This review is also posted on: www.culturecatch.com

Released January 12, 2010, Contra is Vampire Weekend’s second album. Gone is the occasional pseudo-intellectualism of Ezra Koenig’s lyrics, replaced with a literary style reminiscent of J.D. Salinger. Musically, the album is a departure from and an expansion of their previous effort. The production values are much better than their self-titled debut, and the risks they take in terms of instrumentation are much greater. These are my thoughts on first listening to Vampire Weekend’s Contra.

Pre-released “Horchata” seems to set an electronic opening tone for the record. However, on a more grand level it introduces the album’s experimental impulse. The band still is heavily African-influenced, especially in the percussion department, but the songwriting and instrumentation attains a new, stronger balance between professionalism and youthful ambition. The record is exciting and feels fun throughout, like cranking and watching a music box dance in a hip, cluttered apartment.

Ezra Koenig’s words fluctuate between understandable and indiscernable, yet his melody lines remain beautiful regardless of lexical comprehension. When his word are identifiable, they reflect a maturity and wisdom less present in the lyrics of Contra’s self-titled predecessor. Gone on the new record is the Ezra Koenig that “sleeps on the balcony after class”—from “Campus”—and he is replaced with an awake, more pointed, observer. There is something less youthfully naïve about this record, both instrumentally and lyrically. They play with auto-tune on “California English”, which sounds like Animal Collective dueling with a strings ensemble. They let a mariachi band go to town on “Run”. Keyboardist/guitarist Rostam Batmanglij rocks punk like Dave Longstreth on the frantic single “Cousins”.

The calculations would seem contrived if each ingredient on the record didn’t feel so natural and sincere. Even on the relatively mediocre “Giving Up the Gun”—too long without a climax, in my opinion—Koenig’s vocal lines always stand out as some of the most unique in moderrn music. “Diplomat’s Son” kicks in with strings seemingly borrowed from Dirty Projectors’ “Two Doves”, which is a reimagined cover of Nico’s “These Days”, which is a cover of Jackson Browne’s “These Days”… Listening to this album I have to imagine that the band was influenced by the Dirty Projectors’ release Bitte Orca (the guitar licks on “Cousins” mirror a number of DP tracks). Whereas Longstreth’s songs are always heady and sometimes immediately accessible, accessibility and entertainment is the prime goal of Vampire Weekend’s Contra.

The band writes songs that always sound like candy, and to deconstruct them theoretically almost seems counter-intuitive. Something complex and strange with the time signature is happening in the bridge of “Diplomat’s Son”, but it is so easy and pleasant to digest, and therefore analysis seems unnecessary. By introducing minimal allusions through the record—one explicit, in my mind—the band is distancing themselves from the intellectual pretention that might be associated with their Ivy League pedigree. That sort of overt academia has little place on the surface of Vampire Weekend’s music, which is spectacular in its seeming simplicity. There seems to be no high concept on the record other than to make fun, pop music, and the band does just that on Contra. I think Vampire Weekend has made the first great record of 2010.