DJs: Erik Benepe 13.5, Jebb Norton 13.5
Time: Monday 1:30-3:00am
Semesters on air: Three
Discussed: Mysterious text messages, Abraham Lincoln, Orc blood, Parlament Funkadelic’s influence on De La Soul.
WRMC: Your show is on late at night, what’s the strangest call you have received while on the air?
Jebb Norton: Erik’s brother’s really weird.  He’s done some weird stuff.
Eric Benepe: Once, a long time ago, I was with my brother and I got a text from a number I didn’t recognize.  There were no words; it was just a picture of somebody’s eye.  Then, last year, he called me when I was at the station and used one of those online voice modifiers and was like, “Hello, I sent you a picture of my eye a few years ago.”  I was pretty freaked out.
WRMC: Are you guys proud of any certain segments in your show’s history?
JN: We were covering your show (“Nixxon.OK”—Fall 2010) at eight o’clock on a Friday night and we decided to download a bunch of speeches from various people and eras, and then we did an all instrumental set with a lot of hip-hop beats, and then we played the speeches over it.  And that’s kind of, since then, become a staple.  Something that we’ve done a decent amount is, like, speeches or movie quotes and clips—all played over beats.  And a lot of times it’s cool because you can play contrasting music.  For example, you could do, uh, Abraham Lincoln’s speech over Bob Marley.  And then it seems like the speech and the music are synced up a lot of the time.
EB: I think it works well because speeches already have a certain rhythm to them, and they have a lot of space and clear diction, which works really well.
WRMC: Like, on Kanye’s latest album he has Gil Scott-Heron speaking over a bunch of his beats, so I guess that’s kind of a thing now.
JN: Yeah, he consulted us on that… He called up and asked if we would help him.
EB: I forgot to mention he’s one of the random callers we get.
WRMC: Can you give me five nouns that accurately describe your show?
JN: Cactus and grapefruit.
EB: Yeah, and Pyramid, The Joy of Cooking, and Orc Blood, for sure.
WRMC: What has been your favorite album of the past year?
JN: The Wild Hunt by The Tallest Man on Earth
EB: LCD Soundsystem’s This Is Happening
WRMC: Do you guys have a favorite older record?
EB: Electric Ladyland is up there, Jimi Hendrix.
JN: I got Paul Simon’s Graceland.
WRMC: And you guys, on your show, play a mixture of older stuff and newer stuff, right?
JN: Yeah, it’s cool when you can play someone that was active in the ‘60s and ‘70s then right after that someone modern.
EB: It’s nice to see a connection like that.  You can, for example, that this song by Parliament Funkadelic then follow it up with De La Soul or, like, some rapper who samples them, you know?
WRMC: Do you remember the first record you ever owned?
EB: Americana by The Offspring
JN: Hell yeah, that was one of mine too.  That and Take Off Your Pants and Jacket by Blink-182.
EB: Also, White Blood Cellsby the White Stripes, that was great in middle school.
JN: Shaggy, for sure.
WRMC: Do you guys have a favorite song of all time?
EB: I’m gonna go with “Little Wing” by Jimi Hendrix.
JN: I’ll say “Fireworks” by Animal Collective.
WRMC: What’s one band every WRMC DJ should know and play?
EB: Television. Word, they’re dope.
WRMC: Dubstep: friend or foe?
JN: Um, friend.  I don’t think we’ve every played it on the show, though.
EB: Friend for the first five minutes, then it’s dubious. 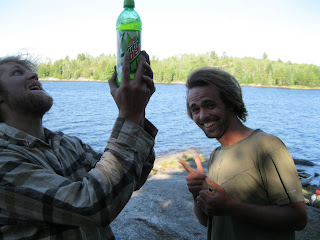