Read this: "Worn Copies: Beach House, Volkswagen, and what it means to sell a feeling" by Eric Harvey 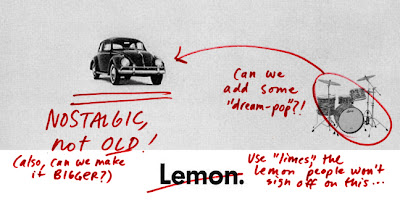 “In a statement released after Beach House publicly protested the ad, a VW spokesperson said the corporation was seeking “something from the dream-pop genre” for the ad. Clearly, few people who would eventually see the ad are going to understand the cultural context of “dream-pop” or even know who Beach House are. This is the point. While for most, the music serves as pleasant-enough wallpaper for a weepy car ad, for a certain target demographic, it’s a dog whistle. DDB is betting that those who do recognize the style of music will ideally transfer that positive feeling– hip yuppie nostalgia– to the car itself. This is how ads co-opt hipness nowadays: They use trendy music, which is never in short supply anymore, to “wink” at a demographic, flattering their tastes and hoping to translate that goodwill into a purchase.”
– Eric Harvey, “Worn Copies”

Sorry to overwhelm the blog, but there’s just so much happening in the world of music! For those of you who do not obsessively hound music blogs and publications (and maybe some of you who do but missed it), Eric Harvey — a contributor to flawed but venerable criticism giant and hipster tastemaker Pitchfork — published an essay on that site last week called “Worn Copies,” about “ineffable desire and creative commercials.” In it, he discusses the recent scandal wherein Volkswagen hired an ad agency, who in turn hired an ad-jingle composer, who in turn proceeded to write and record an uncanny mimic of Beach House’s 2010 song “Take Care,” because Beach House refused to license the song to VW. Why wouldn’t they, you ask, especially when the same song was used by the band’s permission on a primetime TV show soundtrack just weeks earlier? Isn’t that the same thing? Well, no, not quite, according to Harvey — and the distinction reveals some ugly truths about contemporary pop music and its less attractive metaphorical bedfellows. Wait…or does it? Harvey lays out all the complications; read the excellent essay in its entirety over at Pitchfork, and watch the video for Beach House’s “Take Care” (no, the real one) below, directed by Kevin Drew of Canadian indie rock supercollective Broken Social Scene: