John "Bonzo" Bonham, Should we Give a Brit?

Welcome to the second edition of the ‘Don’t Give a Brit’ blog that tries to take something rational from a completely arbitrary show. For the past two weeks we have split the show into two halves of the musical seventies in Britain. Typifying the overarching structure of the radio show, there was no chronological rationale to this split, it was simply a merge of acts from across the decade; creating a diverse show each time. To avoid this complicated diversity, in this blog I have chosen to stick with one absolute legendary pioneer from the era, the late John Bonham – the greatest drummer of all time. So you’re now thinking, that is quite a statement to make, but Bonham was at the forefront of Led Zeppelin’s distinctive sound, which is why the band has received much critical acclaim over the past 45 years. There was plenty of subject choice for this decade, with the rise of British punk and glam rock – now the brunt of many fancy dress outfits. However, I chose to leave the glitter and flamboyancy behind to concentrate on more conventional rock n’ roll. I also did not want to give out the wrong impression to my blog readership in covering the now infamous Gary Glitter in just my second week… So then, Bonham was the standout candidate for me. With his death being in 1980, it would be wrong of me and an insult to his musical calibre not to cover the great man’s final decade. 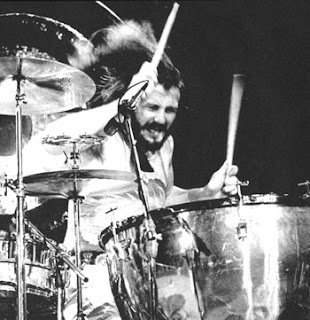 Bonham was the epitome of everything good about rock music. His drumming skills covered many bases – it was a distinctive, powerful sound encompassing an instinctive rhythm and furious velocity (especially through his fast right foot!) To magnify this sound, Bonham would use the longest and heaviest sticks money could buy. It is no wonder that, thanks to his revolutionary double bass style of drumming, Bonzo has been proclaimed the greatest drummer of all time by Rolling Stone magazine and many similar magazines. With other instruments, it has been much more difficult to grasp who was the best ever; such as the debate surrounding guitarists – is it Duane Allman? Jimi Hendrix? Eric Clapton? B.B. King? It is just not so for drummers— there is no debate about who has been the best that has ever graced the musical world. Bonham revolutionised the entire sense of the word drumming, there is no two ways about it. He has influenced modern drummers such as Dave Grohl, Brad Wilk and Chad Smith, but to name a few.
Bonzo just had a tremendous feel for rock n’ roll. His living-on-a-knife-edge style of drumming was perfectly complimented by his faultless and completely in-tune rhythm. The obvious song that illustrates this perfection is “Moby Dick”. This is a song in which Page and Jones simply build towards Bonzo’s mind-blowing mega-drum solo. It would often last for 30 minutes when the band would perform the track live. Bonham once said that “Not everybody likes or understands a drum solo, so I like to bring in effects and sounds to keep their interest” and “Moby Dick” really stays true to that sentiment. Its live performances regularly featured Bonham’s use of bare hands to achieve different sound effects. Heck, I bet he would have whacked his drum kit with a whale if he could. With the complete absence of Robert Plant’s voice in the song, you would think it would a futile task in asking people who have never heard the song before to attempt to guess who “Moby Dick” is by. However, as a result of John Bonham’s drumming capabilities, it becomes almost as recognisable as Plant’s screaming voice.
What makes Bonham’s tale all that more remarkable is the fact that throughout a vast amount of his live performances he was intoxicated. The fact that he kept this resolute rhythm under the influence of alcohol is some achievement. However, it would be wrong of me to praise his effective actions after drinking alcohol as it was alcohol that finally killed this magnificent musician. Prior to a tour of the US in 1980 Bonham drank spirits excessively during rehearsals, beginning early in the morning. After one of these heavy drinking days, Bonham died in his sleep. It seemed each shot he took was another step in his stairway to heaven. The autopsy confirmed that Bonham had consumed the equivalent of 40 shots of vodka in the drinking session that eventually killed him. He was 32 when he died, meaning he is not another member of the infamous 27-club.
Bonham was simply irreplaceable to Led Zeppelin, who split with immediate effect after news of Bonham’s premature death. The band are now limited to reunion tours in which Jason Bonham steps in for his father. To truly understand Bonham’s raw musical talent I would advise you to check out Led Zeppelin’s entire discography. But if I had to narrow it down, Bonham’s finest drumming pieces are located within “Moby Dick”, “Immigrant Song” and “When the Levee Breaks.”
In next week’s ‘Don’t Give a Brit’ show we will be covering the 1980s, so we’ll be leaving behind the moshing rockers of the seventies and replacing it with glowsticks, synthesizers and bad haircuts. In the mean time don’t forget to check out our most recent playlist located at: http://wrmc.middlebury.edu/playlists/16765.

One Response to “John "Bonzo" Bonham, Should we Give a Brit?”