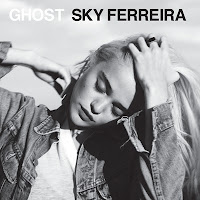 For fresh-faced twenty-year-old pop icon Sky Ferreira, embodying America’s Sweetheart was never an option, much less the goal. At a young age, Ferreira breeched the music scene via MySpace, winning e-audiences over with racy tracks like “Sex Rules” and “Lolita”. Her second extended play solidifies the singer’s image as a natural-born rebel. In the past two years, Sky has capitalized on growing internet phenomenons like ‘soft-grunge’ and ‘pastel-goth’, blending bubble-gum pop beats with a Kim Gordon-esque edge. It comes as no surprise then that Ghost registers as an eclectic collection of teen-blogger anthems. In a recent interview with fashionista and Rookie founder Tavi Gevinson, Sky declared that she “wanted to make something different…and [wanted] it to speak to younger women”. While Ghost undoubtedly caters to the adolescent female audience, my initial listen left me feeling disoriented, and ultimately unsure as to whether Ferreira was writing for herself, the producers she collaborated with, or the anonymous internet following that has come to define her fan-base.
Ghost’s opening track, “Sad Dream”, lures listeners in with a smooth lullaby, as Ferreira’s voice glides effortlessly from a surly alto to wistful soprano. The song is simple, almost too simple to work; it is a trick that the track’s producer, California-born songwriter Cass McCombs, has pulled off countless times: give listeners something clean and familiar, leave them contented at that. The trouble is, “Sad Dream” ends up sounding more like McComb’s creation than Ferreira’s. Her voice is shrouded in Cass’s dreamy acoustic riffs, making for a strong track, but one that lacks a distinctly “Sky” quality.
Similarly, grunge-girl anthem “Red Lips” feels drenched in co-writer Shirley Manson’s (of Garbage fame) influence. The crunchy bass line and whispery vocals sound uncannily like Garbage hit, “Stupid Girl”. Ferreira’s delivery is effortless—she sing-speaks jibes like “you’re ten a penny” with an undeniable cool before the chorus erupts in a wave of power-chords; nonetheless, I find myself disappointed, waiting for Sky’s synth-pop edge to resurface. The track is a far leap from the crooning ballad that starts the EP, and almost left me wondering whether I was listening to the same release. It is for this very reason that Ghost feels disjointed and almost unfinished. Rather than building on the successes of her 2011 release, As If!, Ferreira forfeits her creative ownership and offers too much authority to the producers.
With ominous electro-pop tracks, “Lost in My Bedroom” and “Everything is Embarrassing”,  however, Sky holds her own. Here, Ferreira revisits a style she mastered when she first entered the music scene at fifteen: a careful balance between catchy dance beats and melancholy atmospherics. Accompanied by a booming bass and tight snares, Sky sings wistful melodies of racing minds (“lost in my bed, and I’m lost in my head”) and unrequited love (“maybe if you let me be your lover”). The tracks are definitively teen-angst, definitively Sky Ferreira, and arguably the best on the EP. With these modern girl anthems, she holds nothing back; she sounds sure of who she is as an artist, unafraid to wear both her true bubble-gum-pop colors and a grimy layer of smudged black eyeliner. By the time Ghost draws to a close, “Everything is Embarrassing” gives listeners a glimpse of Sky’s promise. The track shows Ferreira for who she is, a rising commercial-avant-garde starlet who owns her image without apologies. And although disappointed that the EP as a whole fails to showcase Ferreira’s potential, I am hopeful that her upcoming album I’m Not Alright (still awaiting a release date) will give testament to Sky’s capability as a dark-pop girl wonder.