I Can Feel Brit Coming ‘In the Air Tonight’

I know what you’re thinking – blog posts from ‘Don’t Give a Brit’ are synonymous with blog posts about drummers. In effect, I have even tunnelled my concentration to a larger extent than my last post on a single musical artist in dedicating this latest blog post on just the famous Phil Collins song ‘In the Air Tonight.’ I am not intentionally showing my ignorance of the excellent music that was produced during these sublime decades; it is simply poor management on our side. We are not advocators of bureaucracy on our show, we tend to side with arbitrariness.
The 1980s saw the rise of the New Wave musical movement and in another all too typical trait of our weekly show, I have chosen a song which is the antithesis of much of the music that dominated the radio airwaves at the time. This dark, eerie song stands as a binary to much of the upbeat, electronic 80s. But then, if those old rascals Cliff Richard and Tom Jones were still knocking around in the 1980s, I can surely dedicate this blog to ‘In the Air Tonight’…
The title ‘In the Air Tonight’ provokes many thoughts in the minds of its listeners. Is Collins documenting his flatulent habits? Do you think of Miami Vice’s famous scenes from its first episode? Do the numerous attempts at the final mission of Grand Theft Auto: Vice City come to mind? Perhaps the Mike Tyson scene from The Hangover? Or maybe even Cadbury’s 2007 dairy milk gorilla advert (located at: http://www.youtube.com/watch?v=TnzFRV1LwIo)? Judging by all these instances I have just rekindled your memories over, it would be true to say that this song has been widely used in popular culture. The numerous interpretations of the song have been considered in its use in popular culture. Its wide use makes it hard for a listener of the song to solitarily relate it to just one moment in that culture. The track’s inscrutable nature makes it so powerful.
As well as the multiple interpretations in popular culture, the song’s lyrics have also been met with multiple interpretations surrounding their meaning. In consequence, there have been many pervasive urban legends regarding the song’s undercurrent. These urban myths have included whether Collins was writing about a man who watched another man drown. This urban myth gathered cultural credibility through Eminem referencing it in his song ‘Stan.’ Some also argue that a young Phil Collins witnessed a man drown. Over time these two myths became more and more farfetched to the point where it was claimed Collins hired a private detective to find the man who witnessed the drowning, sent him a free ticket to his concert, and premiered the song that night with the spotlight on the man the whole time. The implausible tendency that these myths developed removed their validity and their falsity lied exposed. This led to Phil Collins publically stating that the song was written about the feelings he had surrounding his 1979 divorce from his first wife. This very reason is also why Collins left Genesis for a short time. The lingering tension of the ins and outs of a complicated divorce is structurally mirrored in the song, cumulating in the explosive drum solo at the end. However, with the atmospheric guitar work, simplistic keyboard chords, a prolonged, sequential drum beat and dystopian, Big Brother-esque video (located at: http://www.youtube.com/watch?v=YkADj0TPrJA) it is hard to ignore these credible myths surrounding the song’s creation. These techniques also builds upon the freakiness and macabre already created by the song’s lyrics. 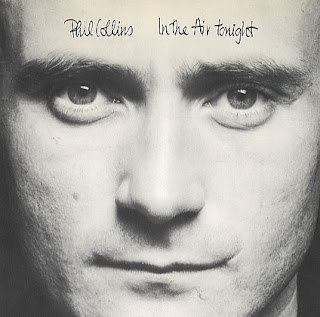 ‘In the Air Tonight’ was Collins’s first single as a solo artist as the rest of Genesis felt it was too simplistic to be released as one of their own songs. However, the intense passion that Collins put into the song led the album Face Value, of which ‘In the Air Tonight’ was the title track, to sell more copies than any other prior Genesis release. It seemed the ‘genesis’ of the song was something that the band had not picked up on prior to this and that caused the group to move in a different direction. ‘In the Air Tonight’s’ raw emotion was typified in that the song’s lyrics were simply an impulse and were not written down prior to Collins’s first play of the song.
So at this point of the blog, I would generally suggest checking out some other music that relates to the blog post. However, in choosing to do my latest blog on a single song I have removed any potential doing that. Similarly, no other Phil Collins song comes close to achieving the greatness, mystery, popularity and acclaim of ‘In the Air Tonight.’ Likewise, I cannot point you in the direction of a playlist as we did not construct one from this week’s show. Stepping into the studio is about where our bureaucratic duties begin and end.  However, having said that, we will be releasing a podcast for all those listeners who are occupied from 1-2pm on a Thursday. But then what things in life are more important than hearing why you should give a brit in life?