Booty Shakin’ with Of Montreal

“This record is only for broad-minded people, who like to dance, make love and freak the f*ck out. It’s not for most inanimate objects.” 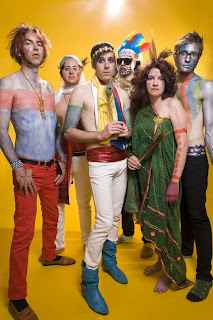 The new Of Montreal album comes out October 7. In addition to the above choice quote, Barnes says of the new album, “This record is my attempt to bring all of my puzzling, contradicting, disturbing, humorous…fantasies, ruminations and observations to the surface, so that I can better dissect and understand their reason for being in my head. Hence the title, Skeletal Lamping. Lamping is the name of a rather dreadful hunting technique where, hunters go into the forest at night, flood an area in light, then shoot, or capture, the animals as they panic and run from their hiding places.”

This is the albums first single which was released August 29, a 7″ on Polyvinyl Records.