Currently Playing: Life In a Glasshouse, by Radiohead

(This morning, checking the blog, I found out that this never posted on Wednesday. My Apologies.) 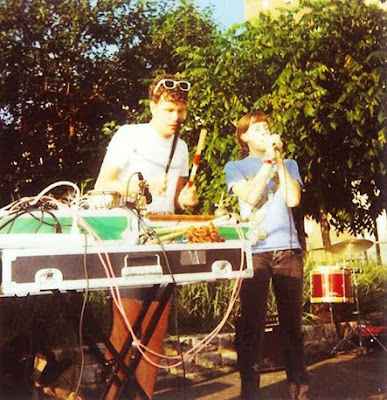 I was introduced to this Brooklyn Duo by a friend maybe… 1 year ago after they released their “03/07-09/07” album. What struck me upon first listen was their unique lo-fi psychedelic sound where the lead female voice resonated from far away on the track. They would go from a very spaced-out melody to this primitive beat with bells, shakers, and sticks. Here is a video of them from 2007 to give you an idea:
Recently though, High Places released a new single from their upcoming album High Places vs. Mankind. Listening to this track, you can see this band going in a new direction with their music. I would say this album could be the band’s In Rainbows as they enter a new dimension in their music where the vocals and beats become more pronounced losing their lo-fi appeal. At first I was a bit put off listening to it, but the more and more I do hear this track, the more and more I want to see it performed live as I am sure they would throw a killer concert. Check it out and let us know what you think:
On Giving Up – High Places