Now last time on Midd Student Music Wednesdays we brought you Middlebury Mash-up Artist Change Your Plans (rumored to be dropping his sophomore album around Spring Break).
This time we bring you a duo who’s actually performing live tonight at the Gamut Room – 9 PM.
This uku duo being the topically named (in October during the Taylor Swift fiasco…) F.U.C.Kanye! 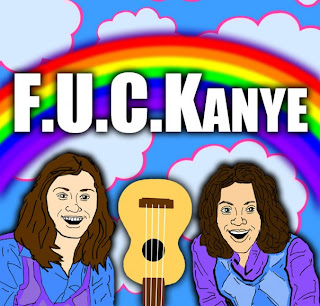 Now I personally have an affinity for this sweater-vest clad duo as I saw them practicing their first song (Wagon Wheel) down the hall in Hadley at the beginning of fall semester. In fact, I am proud to say that it was actually my sweater vest featured in their original video.

Throughout the year you may have seen them recording their videos off of a Macbook all around campus (the festive video below being on Battell Beach), but tonight you can see them live which is something not to be missed! Supporting music endeavors here on campus is what WRMC is all about and what you should be all about too!