Who Knows Who Cares 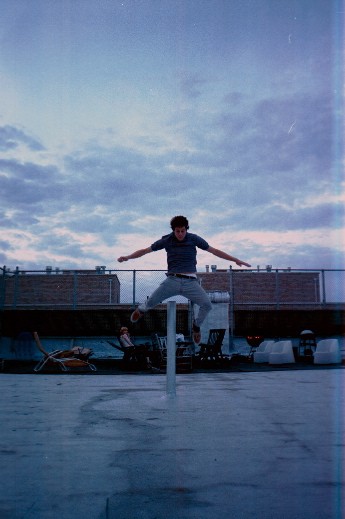 I asked if I could borrow a shirt and he nodded towards room number 13.

“Pick a winner” he said.

The door was ajar and there was an anchor drawn on it. I hopped off the couch and walked in. photographs he presumably took covered the walls, one was of a person frozen in mid air. Clothes covered every inch of his floor creating a complexly textured and colored rug of plaid, stripes and other hues. I kicked my shoes off behind me into the hall and walked across the soft sea of cotton, corduroy and denim towards the bureau.

I opened the second drawer from the top and found t-shirts carefully folded with brilliant colors poking out from the depths of each of the three stacks. Then it hit me, the smell that is. An aroma of old sandwiches, pit sweat, and damp sneakers flooded my nose all at once as I picked up a yellow shirt that said “Hawaii!” on it. There were mud spots all over the back from riding a bicycle in the rain. I dropped it back in the drawer and pulled a purple tie dye up to my nose. B.O.! Another, a trail of salsa skipping down the front, maybe blood, nope, definitely salsa. Another, grass stain! Another, B.O. again, woof!

Throwing the shirts back in the drawer I closed it to seal off the stench. I looked around my feet and reached down to pick up a royal blue shirt from the floor and held it to my nose. Memories of sitting in Stephen’s kitchen during the summer flew fleetingly threw my head. Probably Tide I thought.

I put it on and walked back out to the couch. “That strangely does make sense”. He nodded without breaking his glance from the television.