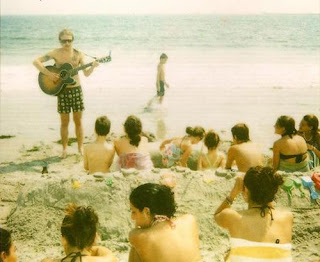 Sophomore albums always pose a Catch-22 for artists. Fans inevitably hate it because it sounds nothing like the first album, or they bitch about how it sounds just like the first release. Unfortunately I was one of those same fans when it comes to the disappointment that was Born on A Flag Day. War Elephant set the bar high, but still, except for a few songs I rarely go back Deer Tick’s sophomore slump effort. I won’t be saying the same for their third release, The Black Dirt Sessions. Instead of sacrificing songs for distortion that happened over and over on Flag Day, the band shifts the focus back to the song craft. The result is a softer, sadder songs dealing with faith and salvation that you wanna hear in a smalltown Southern bar after too many lonely beers.

For most bands this would be dangerous cliché territory especially for some young boys outta Rhode Island, but it never comes off as affected. John McCauley III is a gifted enough songwriter to go back to old tropes of loneliness and losing friends and still sound like he was one of the first to go there. Even when he occasionally does stray into a cliché, the pure raw grit of his voice carries him over it. Pulled out of the bottom of countless ashtrays and bottles of bourbon, McCauley’s voice is at times just gravelly notes that save him from the weak lines or off rhymes that he stumbles over at times. Screaming “everyone is alone” on a song would sound like the worst kind of angst out of anyone else’s mouth, but he somehow pulls it off.

It’s this voice and the songwriting that doesn’t make this your typical sad bastard fare. “Piece by Piece and Frame by Frame”, “Good-bye, Dear Friend”, and “Blood Moon” are some of the best of sad bastard tunes these boys have made. “Mange” is a dense, rollicking, reminder that Deer Tick can still rock, while “I Will Not Be Myself” is proof is a nice reminder of War Elephant. Some of the songs are weak or incomplete, with “Sad Sun” being the obvious sore thumb on what is all in all going to be an album I am going back to again and again.