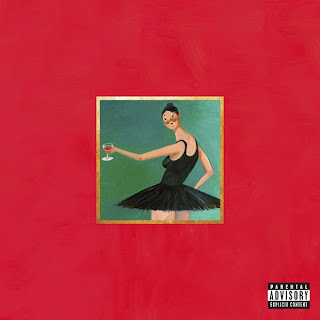 After what is now known as the “Taylor Swift Incident,” from the 2009 MTV Video Music Awards, rapper Kanye West retreated from society, going underground as seemingly the whole world turned against him.

Before he became a praised artist himself, West was known for his production, crafting classic songs for many of hip-hop’s elite such as Jay-Z, Scarface, Common, and Ludacris. His own widely celebrated debut, 2004’s The College Dropout, cemented his place in hip-hop as not only a brilliant producer but as a captivating lyricist.

West returned this past fall to the same stage that had crowned him Public Enemy Number One, this time as the closing performer at MTV’s Video Music Awards. Backed by single piano keys, West used an MPC machine to add sampled sound bites to a beat, literally crafting a one-of-a-kind song right in front of the listeners. This song, “Runaway,” is a representation of West’s struggle with himself and the acknowledgement of his antics that the public has been exposed to over the years (see 2005 Hurricane Katrina/George W. Bush comments).

In the run-up to the album, West has crafted what can only be seen as a brilliant marketing scheme: he took to the social networking device Twitter and has already amassed millions of followers, he agreed to release a new song every Friday until Christmas in what he has dubbed “G.O.O.D. Fridays” (and through these songs has introduced the world to his new posse of artists signed to his G.O.O.D. Music record label), and has also appeared on dozens of talk shows and interviews, even performing on this past year’s Macy’s Thanksgiving Day Parade. Hip-hop fans couldn’t believe their ears and waited in anticipation as legendary producers such as Pete Rock, Q-Tip, and RZA spoke about collaborating with West on his new album. DJ Premier even said that West was “done with electro” and that the album was “strictly hard beats and rhymes.”

My Beautiful Dark Twisted Fantasy is not just an album, it’s a raucous musical event. Though it features enough guest appearances to make even a compilation album seem bloated, West is still the shining star. “All Of The Lights,” with its 14 featured artists and five-minute length will no doubt be a radio hit, while “Lost In The World” featuring a Bon Iver sample, with its banging tribal drumming is guaranteed to get you moving. Arguably the best song on the album is “Blame Game” featuring John Legend and comedian Chris Rock, where West contemplates a failed relationship, placing the blame on himself as well as his unnamed companion of the time.

MBDTF falters when West replaces his quick-witted lyrics and soul-sampled production for simple, one-verse songs and electronically driven beats. Fans that appreciate his backpack-esque hip-hop style will find it hard to relate to the new, emotionally-driven Kanye. For a short album, 13 tracks, much of it is comprised of instrumentals, including three minutes of inaudible autotune at the end of “Runaway.” A quarter of the album is just a rehashing of his G.O.O.D. Friday releases (“Monster,” “So Appalled,” and “Devil In A New Dress”), and another two are strictly instrumental, one featuring Elton John on piano and the final song featuring spoken word poetry by Gil Scott-Heron. The “hard rhymes” DJ Premier spoke of are, for the most part, absent.

MBDTF is not Kanye West’s magnum opus, but instead serves as a testament to the type of music that can be made when under the pressure to return to a once-known spotlight. In this sense, this comeback album is a definite contender for one of the best of the year, but in terms of the Kanye West we once knew, this new music that has emerged is G.O.O.D. but not quite great.