So Organic: A Show Profile of "Bitter Gourd," WRMC’s One and Only Botanical Talk Show

This is its first semester on air.

Anjali and Carly describe Bitter Gourd as a “botanical talk show interspersed with college rock music.” It is perhaps the only show of this kind on radio anywhere. I set out to find out how it came into existence. Here you have it.

WRMC: Ok so, why plants?

CARLY: One year when I was a kid a pumpkin plant unexpectedly grew in my garden. And I decided it was going to be like my child, my plant child. I loved this pumpkin plant. And she grew up and her name was Henrietta and I took care of my pumpkin plant. And then I believe I went away for a little and when I came home Henrietta was dead. And I was so upset. And then from that moment on I just loved plants.

C: Anjali how did you get interested in plants?

ANJALI: Sam Safran, Abigail Borah and I had to do a research project last semester and we chose to do it on invasive species. So we went up to Breadloaf and we were walking around a power line that ran through a forest and there was a small sapling growing in a clearing near the power line and it was the most symmetrical tree I have ever seen. It was opposite- you can either have opposite branching (A, below) or alternate branching (B). It was opposite all the way up. We spent like an hour admiring this sapling. We took a lot of pictures. We didn’t know what kind it was. We found out it was an ash sapling, and that was the moment when I knew I wanted to study trees and plants. I wish you guys could see it. 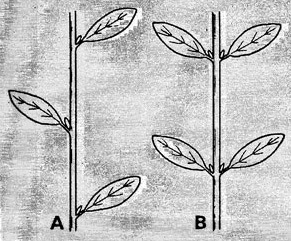 A: Yeah. I take a lot of plant classes.

W: Is there a specific area within plants that you’re interested in?

A: After volunteering at the organic garden, I’m interested in the how biology interacts with food. Food is such a crucial part of our lives and so much is governed by biology. I’m really interested in that.

W: So how did you decide that you want to have a plant show? I mean, you guys are both interested in plants but lots of people have interests that they don’t end up making talk shows about. Why a plant talk show?

C: It was so organic…

A: I worked in the [Middlebury organic] garden this summer.

C: Anjali and I were friends before, but I wouldn’t say we were good friends and then she showed up to Middlebury the last three weeks of summer and started volunteering in the garden every day with me and we worked together and bonded over our love of plants.

W: So you have this deep connection where like…plants connect you.

W: So who suggested a plant talk show? Was it a joke at first?

W: Does the music relate to the talk?

A: It’s the kind of music you would want to play to your developing plant.

C: A combination of classical and heavy metal does the best. That’s true. Anjali did a study on it.

W: So that was your first coming together of music and plants.

A: The first time when my passions collided I’d say.

M: What kind of response do you get to the show? Is there anyone that’s ever like “I really have been wondering that about soybeans for so long!”

C: Martin Sweeney said he learned more in one radio show in one hour than he learned all week.

A: As a kid you’re really only interested in animals because they’re moving and you can anthropomorphize them, where as with plants that’s a lot harder to do. So there’s not a whole lot of interest in plants I guess unless you’re really into the environment. So we just wanted to make plants more accessible– accessible and exciting.

A: A lot of our inspiration comes from my plant bio class.

C: And a lot of it also comes from our summer at the garden.

C: It all came together and this is the pinnacle…

W: And you can hear it every Saturday at 10.

(From left to right: Carly Shumaker, some girl, Anjali Merchant)

One Response to “So Organic: A Show Profile of "Bitter Gourd," WRMC’s One and Only Botanical Talk Show”