Indie Rock: At this time five years ago, I was driving (I had just gotten my license!) home from soccer practice with my windows rolled down blasting Wincing The Night Away, the third full length album from The Shins.  It seemed to me that James Mercer had created the perfect springtime album, that is, until now.  Today, The Shins release their long anticipated, fourth full-length album, Port of Morrow.  In the past five years Mercer dropped his band mates, dropped his indie label Subpop, and signed onto Columbia Records to create an amazing, intricately detailed pop-rock album.  While we all loved the lo-fi days of Oh, Inverted World, the production quality that comes with working on a major label is more than welcomed as it allows Mercer to really showoff every element of his songwriting.  Mercer hasn’t bought into the electronic scene as so many artists have, but instead sticks to the bright, layered guitars that have defined indie rock for so long.  It seems only appropriate to me that Port of Morrow comes out during the first beautiful spring week here in Middlebury.  So, go sit outside and blast if from your boom box!

Stream The Shins – Port of Morrow
“Shoegaze” is at least the subgenre being cast upon Conduits; however, they are resisting this label and if you listen to their debut self-titled album, you will understand why.  The Omaha, Nebraska natives’ official press release explains, “these aren’t affected youth staring at their guitar pedals and hoping that the audience in front of them would just go away. This is music that pulses and crackles with energy and incident.”  And it’s true.  Driven by female vocals, the energy of this album is undeniable.  It is spacious and begs to be listened to under the sun in the open air.   Midway through the album, the track “On The Day” starts out a little quieter, a little calmer, and then breaks into epic cymbal crashes, rhythms, and chanting vocals.  Quit staring at your feet and check out this album being released today on Team Love Records. 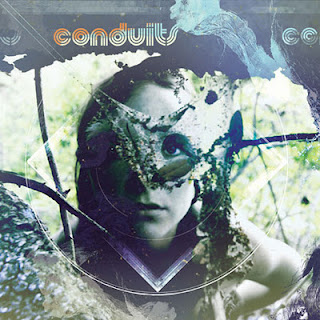 Stream Conduits – Conduits
Electronic: Today, Brooklyn duo Tanlines finally release their highly anticipated full length debut Mixed Emotions.  It’s possible that the beautiful weather has made me a little loopy, but I think most people would agree that this album features some of the best summer dance songs yet.  There is an evident heavy club beat influence, but Mixed Emotions also maintains a balance with quirky and accessible melodies and rhythms.  Songs like “Real Life” and “Brothers” have been on the blogosphere for a while, but check out the rest of the album for even more danceable summer tunes.