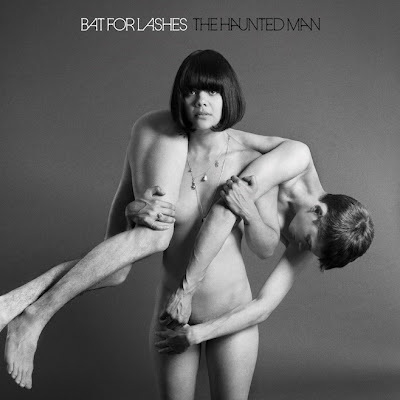 The renowned contemporary photographer Ryan McGinley, best known for his images of buck-naked young adults running amok in the wilderness, is the artist behind the cover art (above) for The Haunted Man, the new album by Pakistan-born British solo artist/Kate Bush devotee Natasha Khan, aka Bat For Lashes. The greyscaled cover sure is lovely, but a bit sterile and high-gloss for the usually more kinetic, organic McGinley. Nevertheless, it makes for a stark contrast with the gaudy theatricality and Urban Outfitters-meets-Labyrinth aesthetic of the images for 2006’s Fur and Gold and 2009’s Two Suns. McGinley’s photograph contains all the same themes (nature, mysticism, sexuality, loss, and so on) as the earlier album covers, but where Khan previously illustrated her narrative by surrounding herself with objects and images, here it’s all concentrated and captured in the singer-songwriter’s ten-mile stare and the graceful posturing of the bodies. It might not be the greatest stuff from McGinley, but it’s a mature, elegant look for Bat For Lashes, whose work drips with as much potent atmosphere as it does facepaint, but who has always fumbled for a unique sound of her own.
Which brings me to the new album’s first single, called “Laura,” which is out and about on the internet as of right now. While its title might lead you to mix “Laura” up with Khan’s biggest hit to date, “Daniel,” and its ivory-tinkling instrumentation might lead you to confuse it with “Moon and Moon” — or, for that matter, Tori Amos’s entire discography — don’t be deceived; this is no mere retread. “Laura” is a stunning, graceful, elegiac piece of music, and it boasts what is easily Khan’s most beautiful, honest, and original vocal and lyrical work to date. However, it’s the arrangement, hardly simple despite its first impression, that truly elevates this track: the lovely piano line, at first stark and lonely, is augmented by gradually crescendoing horns, rich and autumnal. When mixed below Khan’s plaintive cry, the unexpected but very welcome brass section renders the song utterly wrenching without resorting to cheap manipulation — i.e. saccharine strings — in the process transcending the otherwise very understandable case against somber piano balladry. It’s a subtle and original touch, and marks a big step forward for an artist who’s previously seemed more concerned with arranging the feathers in her hair than the instruments on her records. There is no precedent for this sound in the back catalogues of Khan’s numerous and obvious influences, nor in her own. She’s hit upon something special here. If anything, it’s reminiscent of Antony and the Johnsons’ shattering cover of “Crazy In Love,” but even then, it’s singular — Khan leans on contrast where Antony elects for impressionism.


All this is not to sell Khan’s singing short, of course. In fact, there’s a bit just before she cries, “Laura, you’re more than a superstar!” where the singer makes a brief, wordless sound, a passionate vocalization that’s half frustration with Laura and half frustration with her own incapability to adequately express her affection for her friend, and that short but tortured “oooh-ooh” is easily the most powerful moment on any Bat For Lashes song to date. It’s hysterical and controlled, wild and poised all at once — the reconciliation of opposites that’s always been at the core of her music (see the persistent astronomical dualities of the lyrics on Two Suns, not to mention Khan’s creation of a sinister drag queen alter-ego named Pearl), fully realized at last. It’s the fulfillment of the massive, long-neglected potential of Bat For Lashes’s brilliant, ambivalent, ambiguous stage moniker, where “bat” is both a girly verb and a creepy noun and lashes are both the body part and the corporal punishment. In other words, “Laura” everything Bat For Lashes has been trying to stand for since we first heard the noirish strains of her very first single. Combined with those horns, it’s just magical. If shivers don’t go up your spine, you might not have one.
So, if the artwork and single are anything to go by, The Haunted Man might just be a big coming-out for Bat For Lashes, so grab the champagne — oh, and the animal masks; the record’s out on October 23 via Parlophone/EMI/Capitol, just in time for Halloween, which I bet you $5 is Khan’s favorite holiday. View her tour dates here.
Watch the new video for “Laura” below. It’s pretty creepy; you’ve been warned.