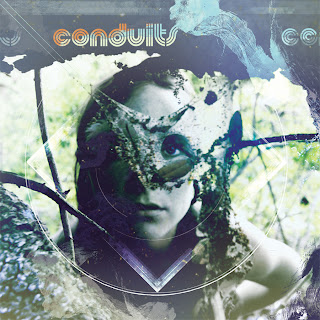 I recently had a conversation with Jenna Morrison, lead singer of the Omaha-based band Conduits. We talked about the formation of the hazy, shoegazy quintet, and their debut, self-titled LP, released this past March. We also touched on bringing the raw energy of live performance to the recording studio, and an epic Godspeed You Black Emperor! show.

WRMC: I’ve never been to Omaha, or even Nebraska, but I’m wondering if your hometown had some influence on your sound?
Jenna Morrison of Conduits: Not on the surface. I’m sure there is some influence because we’ve been around it so much, but our sound is definitely not really like anything else around here. There are a lot of really great bands coming out of Omaha and Lincoln. We definitely strive to be good and seeing musicians playing well and making great music pushes us to do the same.
WRMC: How has your music experience in the past and songwriting in the past influenced what you’re doing with Conduits?
JM: I got together with Nate and JJ and… in our general vibe we just instantly meshed. It just came kind of natural to us. That probably sounds kind of cheesy, but really the general vibe of the stuff that I used to write and the stuff we’re doing now is kind of the same.
WRMC: It makes total sense that if you found some guys you jived with, that would come into something. Since Omaha’s influences didn’t necessarily do so much for you, what did you listen to growing up and when you started your musical career? If that’s not particularly relevant, who has been relevant as an influence for conduits?
JM: Each band member has different influences, so it’s kind of a hard question to answer. As far as the band goes I would say Spiritualized, My Bloody Valentine, Radiohead. There’s quite a few.
WRMC: Have you guys felt like you’ve learned anything in the process of being on tour and being exposed to other musicians? I’m wondering what you guys have picked up in that process, and if during that process you’ve realized things that you would like to change from the first album, and how you might like to move forward in the future?
JM: I would say that it definitely helped shape a little bit how we perform live. I think that playing every day has made us all more comfortable with who are and what we do on stage without having to put thought into it. That I feel has been really beneficial. I wish we could play shows every day, all the time, honestly. As far as our sound goes…The way I sing things live and the way I sing on the album sometimes differs a little bit. And that might come out a little bit more in the next album.
WRMC: What exactly is the difference between your voice when you’re singing live and on the album? How might that style you have live come out on the next album?
JM: You probably noticed on the album that there’s a lot of instrumentation on the songs. The band has a tendency to get pretty loud, and sometimes, live, I have to sing louder than I do on the album, just to come across. I think, on the next album, I’d like to have more songs where I’m a little bit less demure, slightly more rock n’ roll.
WRMC: Interesting to hear how the live shows opened up new avenues for you by virtue of you being forced to sing over your bandmates.
JM: Yeah, out of necessity. I’d like that to come across more in the recordings the next time around.
WRMC: Can you tell me a little bit about your personal background and how that’s fed into this music and the part you played in creating this first album. What your role was in the creative process.
JM: I mean for the last, I don’t know, I guess probably nine years, I’ve been playing in bands or singing in bands, mostly backup vocals. Eventually I became a backup vocalist for Son, Ambulance, which I feel opened up a lot of avenues for me. I did that on and off for years, but in-between there were other projects that I worked on and recorded for and wrote for. I don’t know, I would either drop the ball, or lose or interest, or something wouldn’t vibe well with me and you’d kinda, you know, move on. Nothing really ever stuck for me previous to this band. And then of course I met Nate and JJ and instantly jelled super well with their style and what they wanted to do. It made perfect sense.
WRMC: What are some landmark bands that helped shape what you wanted your sound to be like.
JM: I remember I went to a Godspeed You Black Emperor! show when I must have been seventeen or something like that. That show really hit me in a certain way. The vibe of the music, the feeling I guess, definitely geared me more towards the type of music that we are making now: stuff that’s moody, almost emotional without being like outright lyrically emotional– just kind of powerful music.
Their music is almost droning without actually being droning. I just remember being at this show and kind of feeling completely overtaken by the music.
WRMC: So what are you guys thinking about the future? What’s your timeline looking like for this next album, if you have one at this point?
JM: People would like to have a new album out by next summer. I know we’ll be recording stuff as soon as possible.
WRMC: It was cool to hear that you had played for so long and it took you finding a couple of guys who were doing the same kind of thing you wanted to do in order to come together and make a full-length album that you’re happy with.
JM: It feels really good. I feel really fortunate that I’ve been able to make music with these guys.

One Response to “Interview with Conduits”