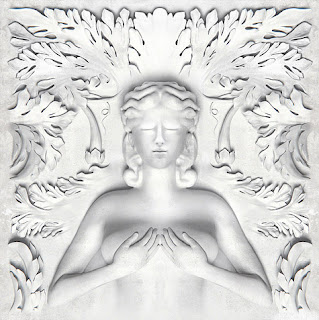 Welcome to the premiere of This Far, a column which I’ll be writing every two weeks here on the WRMC blog and moving over to the new website once it airs on the web.  In this column,  I will be reviewing a recently released hip-hop album, with the occasional mixtape thrown in, in an attempt to help you wade through the flood of beats and bars that hit the internet everyday, so that you only listen to the dopest of the dope.  I will be reviewing a range of albums, from the obscure to the mainstream, from the socially-conscious to the Ciroc-and-kush-induced unconsciousness.  If you have any requests, suggestions, complaints or props for This Far, please give me a shout over email, or on Twitter, @LukeAdirondack.
To kick things off, I’m going to be taking a look at Cruel Summer, the long anticipated collabo album coming out of Kanye West’s G.O.O.D. (Getting Our Our Dreams) Music label, a subsidiary of Island Def Jam.  Kanye founded the label in 2004 and has been accumulating an increasingly impressive roster of signees ever since.  Cruel Summer, which dropped on Tuesday after several delays, features many of these artists, both producers and rappers, in a posse album whose members seem to have little in common other than thick ol’ stacks.
Previously unreleased “To The World” kicks things off (two of the listed producers have the $ symbol as part of their professional names), and, bizarre R. Kelly hook and all, it sets a pretty representative tone for Cruel Summer.  The heavy beat with dramatic swaths of piano and pounding percussion give the track sort of brave new world sound; granted, a world in which the self-proclaimed “God of rap”(Kanye) can compare himself to Francis Ford Coppola and criticize Mitt Romney in the same breath.  This leads into the four big singles, with which most hip-hop followers will already be familiar, “Clique”, “Mercy”, “New God Flow”, and “Cold”, with new release “The Morning” thrown in.  As might have been guessed, these four tracks hold as the highlights of the album.  “Clique” overcomes a bit of an obnoxious Big Sean hook with solid verses from Sean, Jay-Z, and ‘Ye, as well as a banging, varied beat from the red hot Hit-Boy(of “Niggas in Paris” fame).  “Mercy” reminds why it was unequivocally the official summer jam of 2012. “New God Flow” features great verses from Pusha T, formerly of Clipse, and Ghostface Killah, while Kanye takes self-worship to astronomical new levels.  This trend continues on “Cold”, on which Kanye professes his love for Kim Kardashian (the song first leaked in the Spring), and the fact that the two are now together seems to confirm “Cold”‘s message: if ‘Ye can say it, ‘Ye can get it.  Unfortunately, from there the album seriously falls off.  Another great Hit-Boy beat is wasted by The-Dream’s horrible hook on “Higher”, and mundane, “promised Kanye I would appear on this one” spots by Common and John Legend provide only disappointment.  Low-level G.O.O.D memebers, such as CyHi the Prynce, Teyana Taylor and D’banj bring very little to the table. “The One” provides a bright spot; in fact, it is probably the track on the album that most recalls College Dropout and Late Registration Kanye, both in production, flow, and lyrical content.  Big Sean and 2 Chainz provide good support, especially Chainz, who impresses with a surprisingly reflective verse.  Finally, the posse remix of Chief Keef‘s “Don’t Like” is tacked on, sounding ridiculous after John Legend’s, wind-chime laced “Bliss”.  Still a banger, but absurdly placed.
However, it feels almost appropriate that Cruel Summer should end with such an ill-fitting song that was clearly included because Kanye and crew like it.  The album is chiefly about self-indulgence, both in its musical choices and in the lifestyle that the music celebrates.  Part of that indulgence is not catering to the expectations of old-school Kanye fans.  The album’s heavier beats don’t resonate with his early work, nor does the intensely ostentatious boasting.  This is no longer a man lamenting his basket-weaving course.  That, in the end, is the value of Cruel Summer; it represents one of the musical geniuses of our time celebrating the ability to make whatever music he wants, and to put on whomever he wants.  That being said, I wouldn’t blame you for standing pat if you’ve already downloaded the major tracks.  I don’t think ‘Yeezy will mind.
Best line: “My girl a superstar all from a home movie!”-Kanye, “Clique”.
Also worth checking out: Shoot Me or Salute Me 4, Waka Flocka Flame (Mixtape)