Don’t Give a Brit about the Sixties

Welcome to the first ever blog edition of the ‘Don’t Give a Brit’ show that airs on WRMC 91.1 FM at 1-2pm on a Thursday afternoon. I, DJ Phil the Rush, will be constructing a weekly blog post on a particular aspect of the show that we’ve touched on that week. For those of you that are unaware of the miniscule method in the monstrous madness of the ‘Don’t Give a Brit’ show; myself and my fellow British comrade are taking Middlebury College (and the surrounding area) through the briefest, most crass history of British music ever experienced. For instance, we began this week in possibly Britain’s finest musical decade – the Sixties – and in doing so completely disregarded the existence of musical acts preceding this era. Consequently, to anyone who is a big fan of Cliff Richard and the like, I hold my hands up and apologise. Quick tip though, if you walk into your local greeting card store and open up the nearest card, I can almost guarantee “Congratulations” will be blaring out of it. His famous song containing the lyrics “congratulations and celebrations/congratulations and jubilations” is a massive hit with Hallmark as inserting Cliff’s voice into the card effectively does their job for them.
The obvious place to begin these series of British themed blogs is with what is now regarded as the British Invasion of the 1960s. British musical artists completely dominated global airwaves during the decade and Beatlemania spread internationally and most famously in the US. On 4th April 1964 for example, The Beatle’s occupied each top five position in the US Billboard Hot 100 singles chart in a feat that has not been matched since. Their easy-listening popular sound was a breath of fresh-air for US listeners who longed for a change in the nation’s musical direction. 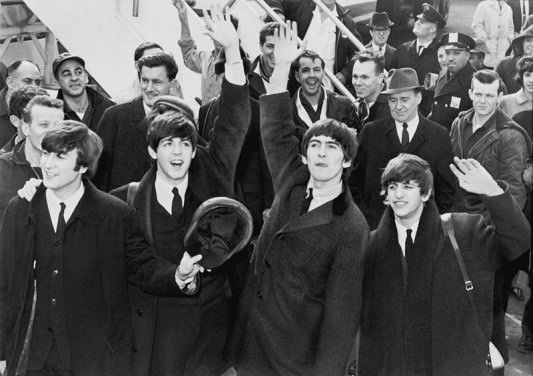 It did not end there for the British music industry; The Beatles were soon to be followed by the successes of The Rolling Stones, The Dave Clarke Five, Donovan, The Animals, the timeless, never-ageing Tom Jones and many many more. This arguably cumulated on 8th May 1965. On this date, the US Billboard top 10 was made up of entirely British acts in all but one position. The contemporary British music industry, through such auto-tuned, anti-poetic, mainstream pop acts as The Wanted, Jessie J and One Direction would be lucky to even reach the periphery of this famous top 10. I’m not even going to subject my fingers to typing about Cher Lloyd’s musical ‘contribution’… Alas, I digress.
This onslaught of British music was mainly caused by British youth’s real feel for the rock-and-roll idiom and anyone-can-play aspect of the Skittle craze from across the Atlantic in the decade before them. These charming invaders tinkered with American rock-and-roll music and returned it to within its borders – redressed and restyled – to a generation largely ignorant of its historical and racial origins. For example, “The House of The Rising Sun” shot to top spot in the US in September, 1964 and was the first British Invasion number one not to be connected to The Beatles. However, what is fascinating is that it was a re-jigged traditional American folk song from the 18th Century. The smoke screen that was placed over this evident American influence is part of the reason why the British Invasion was so creative and intricate.
However, it would be wrong to assume that these British acts were carbon-copies of each other and/or shared distinctive and similar sounds. Take The Rolling Stones for example; Jagger, Richards and co. did not follow the same popular music sound as their other successful British compatriots. The Rolling Stones were a more dark, unusual and less parentally accepted band that explicitly made their blues and African-American influence known – an American musical style that had largely been ignored by the mass US population. The name of the band, the shorthand of their character, was taken from “Rollin’ Stone,” a song by the African-American blues musician Muddy Walters. Likewise, Mick Jagger evidently modelled his trademark dance moves on minstrelsy shows of the late 19th Century and early 20th Century.
Regardless of which musical direction these British bands went in, they undoubtedly helped cement the now conventional formation of the rock band – with guitars and drums at the forefront. These acts revolutionised music during the most culturally changing era of recent history. Their presence today is as real as ever, with The Rolling Stones arguably the most sought after live band after inspiring generation after generation.
Songs to check out: Literally anything by The Beatles and The Stones; Dave Clark Five “Because”; Donovan “Sunshine Superman”; The Animals “The House of The Rising Sun” and if you must, Tom Jones “It’s Not Unusual.” Plus, any of the tracks from the ‘Don’t Give a Brit’ playlist this week located at http://wrmc.middlebury.edu/playlists/16626.
In Thursday’s show we will be covering one half of the British 1970s, as there is just simply too much material to cover in a one-hour sitting. You’ll get another blog post from me within the next fortnight about an aspect of this fascinating decade, which, believe it or not, contains way more famous material than the Sixties and touches on many more musical bases. These include: Progressive Rock, Glam Rock, Heavy Metal, Glam Rock, Synth Rock; plus many more!