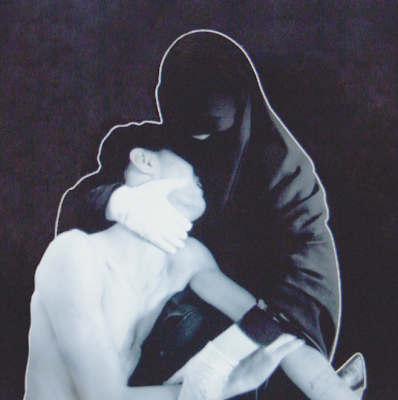 Big news from Toronto’s least friendly, most danceable goth duo, Crystal Castles (sorry, Trust — nice try!). Crystal Castles producer Ethan Kath and vocalist Alice Glass have been dropping hints about their third album for a few months now, but at last, they’ve provided the world with details. Out November 5 via Casablanca/Fiction/Universal Republic, the new record will, like its two predecessors, be self-titled (Crystal Castles’ #1 favorite thing is to be difficult), and henceforth will be known in practice as Crystal Castles (III). That’s the cover art above, featuring what Pitchfork tells me is “an award-winning image by Spanish photographer Samuel Aranda…taken after a street demonstration in Yemen on October 15, 2011.” It “pictures a woman…holding her son…who suffered from tear gas.” Seem bleak? Well, of course: Crystal Castles’ #2 favorite thing is to be depressing, and the following statement from Alice Glass suggests that III will find her and Kath at their most gloomy and antagonistic:

“Oppression is a theme, in general…. A lot of bad things have happened to people close to me…and it’s profoundly influenced my writing as I’ve realized there will never be justice for them…. I didn’t think I could lose faith in humanity any more than I already had, but after witnessing some things, it feels like the world is a dystopia where victims don’t get justice and corruption prevails. I’m one step away from being a vigilante to protect people and bring justice to the people I love. I’ve thought about it.”

Okay, so what I get from that is: yikes, Alice Glass is terrifying. If you encounter a tiny, very angry 20-something woman dressed sorta like a bat in a Toronto alleyway, run the f away before she destroys you! If you need more convincing, click here to DOWNLOAD (for free!) the new single from the album, entitled “Wrath of God” (…um, help!). Kath’s production on the track, as with the earlier single “Plague,” continues to blend 8-bit, shoegaze, and nu-rave textures with danceable yet melancholy results, rendered psychologically disturbing by Glass’s hysterical vocal work. The richer, dreamier sound is probably the result of the acoustic recording processes and all new keyboards Kath employed during the recording sessions for III. He said in a statement that he “wanted the album to have a completely different sound,” which we can safely assume is code for “Alice Glass threatened to eat me alive if my tracks grew repetitive and stale.”

A new album, a new album cover, a new single, and a new reason to be afraid of Ms. Glass is already a lot of new information from this famously cryptic pair, but WAIT, THERE’S MORE! Have you been sleeping soundly at night? Are your dreams pleasant and relaxing? Remedy these conditions by watching the reeeeeeally, really upsetting new music video for the first single from III, “Plague,” which came out on 7″ this summer. Depicting a possessed woman’s final throes, a ballet lesson gone demonically awry, and an unexpected, decidedly unpleasant use of milk (ew), this is seriously freaky stuff, freakier even than the song that soundtracks it. The video is embedded below; do not let a child see it.

UPDATE: The video was directed by a fan, and the band liked it so much they made it the official video for the track, which tells you all you need to know about their taste. The footage is actually from a 1981 horror film called Possession. (Information courtesy of Pitchfork.)