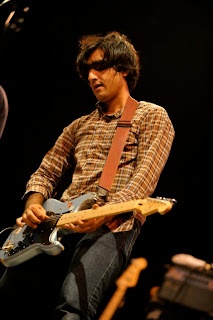 So a few weeks ago Ward and I went to see Explosions in the Sky in Central Park. It was the Austin band’s 10th anniversary show and despite the opening of the heavens, the chitter-chatter audience, and a few technical problems the show was fantastic. I was pleasantly surprised by how well their movement-oriented epic songwriting carries over to the live show format. They didn’t stop playing once between songs and left the meaningless banter to the openers, The Constantines. The setlist was as follows.

Here is an audience recording of the show.

Check it out and go support the band at http://www.explosionsinthesky.com/