Do you know that girl Elori Kramer? I think you do. You know, Elori Kramer! You don’t think you do? I think you do though! Have you seen that girl stitching up a killer dessert panini at Proctor? She uses cheese and apples, because she has sophisticated tastes. If she could, she would probably whip up a bellini panini. Doesn’t ring a bell? No dice? Hm! Let’s see. Well she’s got a whole mess of plaid in her wardrobe and usually on her body– she wears a periwinkle hat that’s crocheted, maybe by her grandmother. And she’s got really good bone structure. Still nothing? Huh. Oh wait that’s her!!! 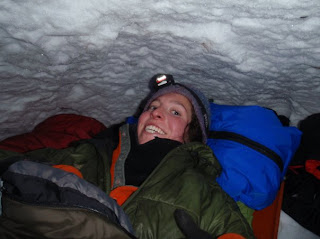 Well folks, I bring her up not only because everyone always wants to get acquainted with a new smiling Feb face, but because we’ve got a new artist in residence (it’s her!)!
If I remember correctly, it was the night of the Feb Talent Show that Elori Kramer taught us all what it means to technically throw down on the guitar. She took the stage, wielding her mighty acoustic sound-box, and ripped it up; it’s all a dream at this point, but she plunked a hollow ramble with her tricky fingers, that at first was embedded in a bandwith of whoops and hollers and “holler!”‘s from her classmates, but that eventually skipped trippingly into a vat of silence- occasionally an exhale would be sketched into the silence between her rumbling movements, but not until the end, when her performance climaxed in a fury of strummed ruminations and dizzy spells of percussion on the face of the guitar, was her performance met with its honest reaction: fucking applause.
It was indeed a tough act to follow, but for Elori, that act followed a much more ambitious one: for Elori’s Febmester, apart from a NOLS excursion and a lot of cereal and cartoons, she went on tour. Serious stuff, right? Sure! The Northern Howl Band, Elori’s gang, is made of five. With all members hailing the Minneapolis area, the Northern Howl Band has been forming in many forms for a few years now. About two years ago, the NHB threw down their first demo; soon after their real first recording was conceived in a studio (with a sound engineer and all of that fancy stuff). In a natural progression, their tour took place this fall, and by December they had been contacted by Horseshack Studios, the brains behind the independently-famed Daytrotter Sessions, by whom the group was offered their very own session- a tradition that partially fostered the initial popularity of currently artists such as Andrew Bird, Dirty Projectors, The National, Grizzly Bear, Fleet Foxes, Bon Iver, and Vampire Weekend, to name very very few.
Check out their Daytrotter Session here!:

If transpirations until now have indicated anything, this isn’t the last you’ll be hearing from this one, either.